Every Oregon Divorce is Different

WE UNDERSTAND THAT ENDING A MARRIAGE IS NEVER EASY

The process of going through a divorce is almost always a difficult time. Divorces are often, although not always, acrimonious proceedings that are rife with the potential for conflict. However, the most challenging divorces are those in which children are involved. At Gearing, Rackner & McGrath, LLP, we understand the emotional impact of divorce, as we have been helping clients in Oregon and Washington with their family law issues since 2005. Our child custody attorneys are intimately familiar with how the courts determine child custody matters and are prepared to aggressively advocate on behalf of our clients’ interests throughout every step of the process.

Not surprisingly, determining child custody is frequently the most contested aspect of a divorce case. What makes Oregon child custody matters difficult is not the legal standard that courts apply when making these decisions, as the court is bound to implement a custody arrangement that is in the “best interests” of the child. However, determining what is in a child’s best interest can be exceedingly difficult, especially when it comes to a child’s relationship with their parents.

In a joint custody arrangement, both parents share in the decision-making responsibilities of a child. This refers to major life decisions, but not necessarily everyday life choices. For example, parents with a joint custody arrangement may each have a say in the child’s religion, healthcare, education and living arrangements. However, each parent would be the sole decision-maker during their parenting time when it comes to everyday decisions such as the child’s diet, who the child keeps as friends and the household rules that the child must follow.

The guiding principle for Oregon family court judges when it comes to determining child custody matters is what is in the best interest of the child. Section 107.137 of the Oregon Revised Statutes explains the factors that a judge must consider when evaluating the best interests of a child, including:

Under the terms of the statute, a court cannot rely exclusively on one factor to the exclusion of the others. Instead, a court must consider each factor individually, and appropriately weigh it against the other factors. Similarly, there are certain facts that a court cannot consider. For example, a court cannot base its custody determination on a parent’s disability, unless the parent’s disability impacts the child’s health, safety or welfare. Similarly, as long as paternity is established, courts will treat married and unmarried parents the same.

Child custody issues are very emotional, and it is not uncommon for parents involved in a child custody dispute to try to raise any issue they think makes their case stronger. However, when it comes to factors such as a parent’s conduct, marital status, income, social environment or lifestyle, courts can only consider these to the extent they may cause emotional or physical harm to the child. Finally, courts give no automatic preference to a child’s mother based on gender when making a custody determination.

Once a judge makes a child custody determination, that order is final unless it is appealed to a higher court. However, if a party is later able to show that there has been a change in circumstances and that a modification to the child custody order is in the best interests of the child, the court may modify the order.

An Oregon Guide to Child Custody 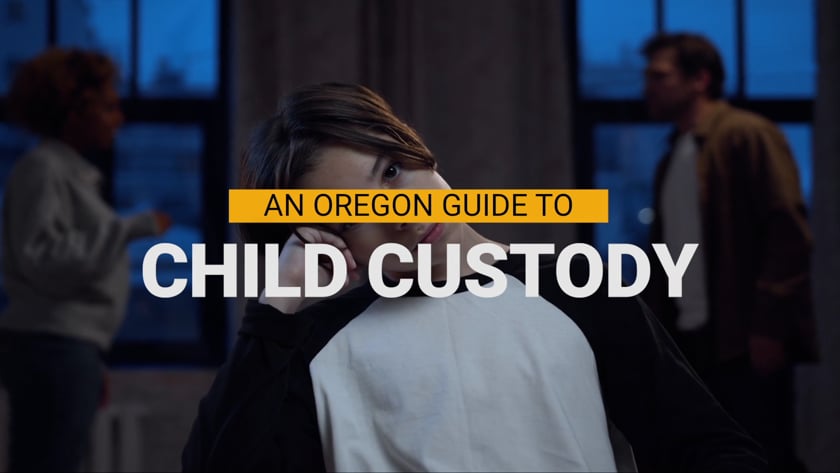 If there are concerns about a child’s safety when spending time with a parent, a court may impose supervised parenting time, which means that the child will only be permitted to spend time with the parent when a third party is present. In some cases, the supervisor must be a professional or even a therapist.

If you are going through a divorce and are concerned about child custody issues, contact one of our family law attorneys at Gearing, Rackner & McGrath, LLP. As dedicated divorce lawyers, we have extensive experience handling all types of family law cases as well as the issues that frequently come up when going through a divorce, including determining child custody matters. To learn more about how our award-winning attorneys can assist you in pursuing custody of your children or modifying an existing child custody order, call us at (503) 222-9116 or contact us through our online form to learn more about how we can help.